I've been a Star Wars fan since 1977 when I was about 4 years old and first saw the original movie in theatres. However I didn't start collecting any of the Kenner action figures until the early 1980s when I was a bit older (I was still enamoured with my 8 inch Mego Batman and Robin dolls and the Fisher-Price Kermit puppet!). I used to have several of the ships including the At-At but have parted with most of them over time. A fleet of Star Wars ships does take up a lot of storage space! 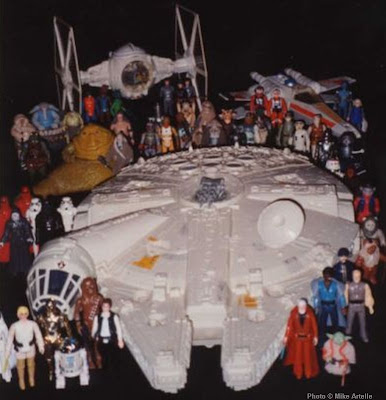 However, I have held onto all of the original Kenner Star Wars Action figures from the first three movies. I'm only missing the 15 "Power of the Force" figures from the early 1980s. I've also kept the Millennium Falcon, X-Wing Fighter, Tie-Fighter and all of the larger creatures. 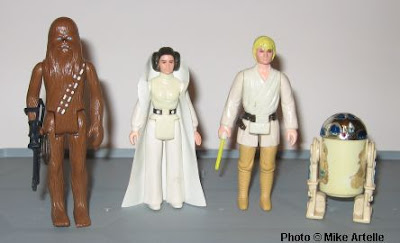 Chewbacca, Princess Leia, Luke Skywalker and R2-D2 were the first four figures released by Kenner in 1978. These were the "Early Bird" figures that were sold in advance for Christmas 1977 as part of the famous "empty box". As Kenner didn't have any figures produced in time for the 1977 Christmas season they sold a cardboard envelope with a mail in certificate, which guaranteed shipment of these four figures shortly after Christmas. The envelope opened up to show a diorama with illustrations of the first 12 Star Wars characters that would soon be made as action figures.

The original figure of R2-D2 was made with a decal sticker around the white tube section. On loose figures this sticker is often peeled off which makes it difficult to find an original R2-D2 in good condition, unless it is still sealed in the original package. The Luke figure can be found with yellow hair or brown hair. 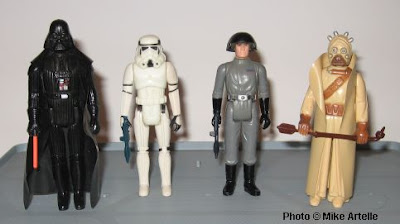 Later on in early 1978, once all the Early Bird orders were filled, the first four figures were packaged on cards and sold in retail stores along with eight other Star Wars figures. These included Darth Vader, Stormtrooper, Death Squad Commander, and Sand People (Tusken Raider) shown above, along with Ben (Obi-Wan) Kenobi, Han Solo, C-3PO and the Jawa shown below. These became the first 12 figures in the series. 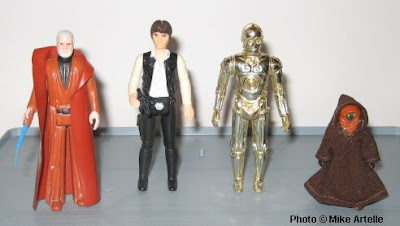 The back of the card packaging for these first 12 figures show all 12 figures that were available in the series. As this was the only time an assortment of just 12 figures was featured on the back of Star Wars figure packaging, figures from this original run that are still in the original packaging today are referred to by collectors as "12 backs". All 12 of these figures were later repackaged on different cards that show a larger assortment of figures on the back, so the packaging becomes very important when determining the value of a figure.

The figure of Han Solo was released with two different heads. I've always wondered why Kenner did that? 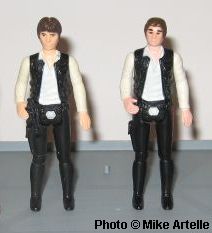 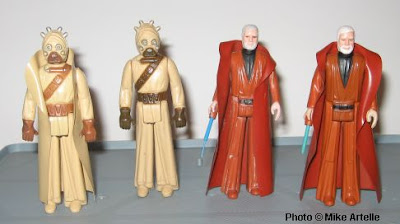 Many of the figures also have colour variations, such as the light brown or dark brown Tusken Raider, or the grey or white hair on Ben Kenobi. Below is a closer view. 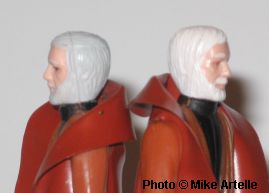 The Next Eight: Series 2 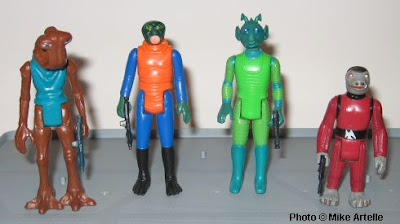 The second series of Star Wars figures to be offered in 1978 included Hammerhead, Walrus Man, Greedo, and Snaggletooth shown above, along with Power Droid, Death Star Droid, R5-D4, and Luke in X-Wing Pilot outfit, shown below. Sears stores sold a rare varitation of the Snaggletooth figure that has longer legs and is wearing a blue outfit instead of red. This is known to collectors as the Blue Snaggletooth. 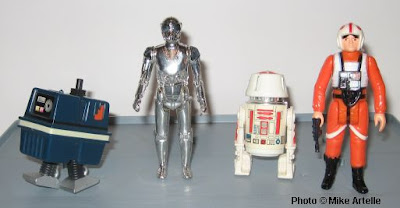 At this point there were 20 figures in the series, so the back of card packaging was updated for the entire line to show all 20 figures. Therefore, this revised assortment is referred to by collectors as "20 backs".

Also in 1978 Kenner released the Land Speeder, Tie-Fighter and X-Wing Fighter vehicles, along with the Death Star Space Station playset. 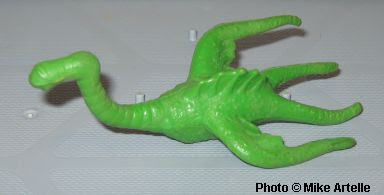 Here is the rubber Trash Compactor Monster that came with the Death Star Space Station Playset in 1978. 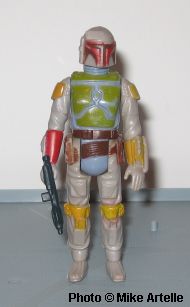 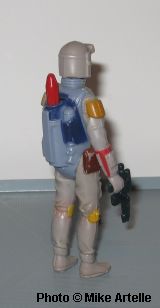 Some collectors would argue that the best was saved for last with the addition of Boba Fett who, oddly, had actually never appeared in the original 1977 Star Wars film. The character would eventually make his film debut in the sequel "Star Wars: The Empire Strikes Back", released in 1980. In order to get fans excited about the new film, Boba Fett was offered as an exclusive figure in 1979 that could only be purchased through the mail. Also in 1979, the Boba Fett figure was exclusively featured next to the assortment of action figures shown in the booklet that came with the Star Wars Collector case. By 1980 the figure was added to the regular line and sold on cards in stores. Therefore the card packaging was again altered to show all 21 figures available, and is referred to by collectors as "21 backs". These would be the last series of figures to show the original Star Wars logo on the front of cards. 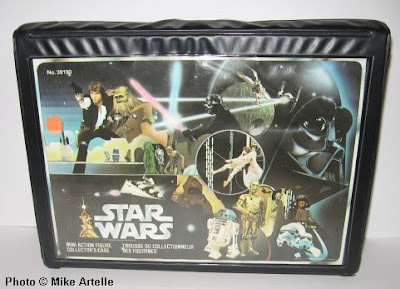 Star Wars Collector's Case from 1979. By 1985 five variations of this case were available, however this is the only one that has the original "Star Wars" title logo on it. In 1980 the same artwork was used with "The Empire Strikes Back" title logo in place of the Star Wars logo.  The other three cases that were made each featured unique artwork on the cover. Two were marketed for "Empire" and the last was for "Return of the Jedi". Of all the variations the Star Wars case is the most common to find. 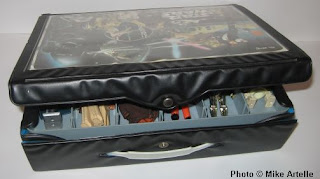 The lid is held closed by a two-piece button that snaps together. A flimsy plastic handle was also added to the top. The case can hold 24 action figures, and when it is full the case becomes too heavy for the handle. Often the handle will tear loose, so if you ever get one of these collector cases in good condition never use the handle to carry it with. That being said, I still think these original Star Wars cases are awesome! 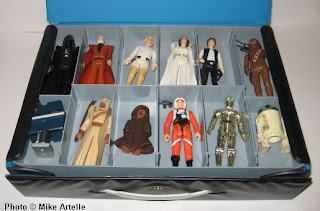 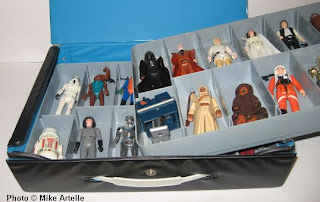 The case comes with two trays. Each one holds 12 figures. 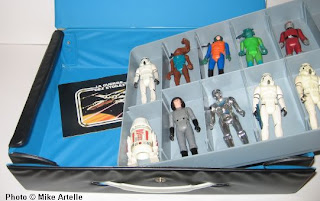 Here's a collecting tip! If you find a Star Wars case at a flea market or nostalgia show, always look underneath the bottom tray to see if the original 1979 Kenner booklet is still there. Cases that were sold in Canada came with two booklets, one in English and one in French. I just have the French one. 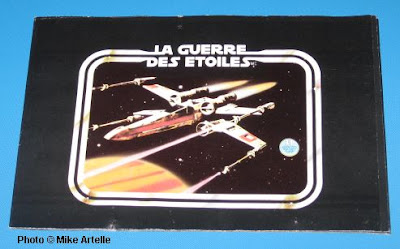 The front and back cover of the 1979 Kenner booklet are the same.

Page 1 showing Luke and Han Solo's guns (which today would be illegal to sell in stores - at least it would be in Ontario!), and page 2 showing some of the large size figure and doll assortment.

Page 3 showing the rest of the large size figure and doll assortment. The Ben Kenobi doll and large size IG88 seem to have been forgotten from this booklet! (I wonder if perhaps they were added to the series after this booklet was made?) Page 4 shows the die-cast vehicle collection.

Page 5 shows the "Land of the Jawas" playset and the Millennium Falcon for the 3-3/4 action figure series. A small toy Star Wars van is also shown. This is an awesome 70's item as painted fantasy scenes on the sides of vans were all the rage at the time!  Page 6 shows the X-Wing Fighter and Death Star Space Station playset for the 3-3/4 figures.

Pages 6 and 7 show the entire 3-3/4 action figure collection that was available at the time. Boba Fett was the newest figure to be added to the series, which is likely why he is featured.

To see some of my large size Star Wars dolls visit my doll blog here: http://mikeysdolls.blogspot.ca/p/1990.html 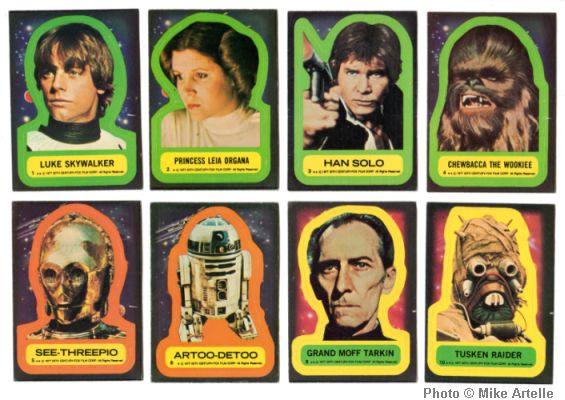 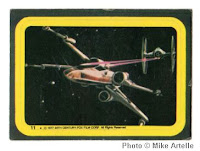 Card #11 shows an X-Wing Fighter being chased by a Tie-Fighter.