Return Of the Jedi Action Figures

Released in 1983, the first series of Return of the Jedi action figures included 18 new figures. At this point there were a total of 68 figures to collect. I'm still working on this page, so I'll add the rest of the figures here soon! 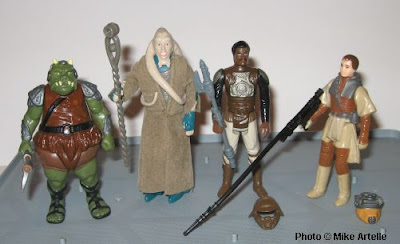 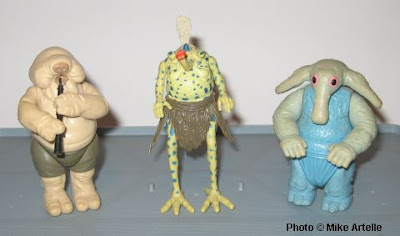 Unfortunately the colour of Max Rebo's head and arms has faded over the years. The figure used to be all the same shade of light blue. I have his piano and will add a photo soon. Sy Snoodles came with a microphone on a stand which I'm missing.

One of the many things that I can't stand about the revised version of Return of the Jedi from the 1990's is the addition of an animated Sy Snoodles, to replace the puppet version, and that other fuzzy character who mugs to the audience. These new characters look and behave too much like cartoons and don't belong in the Star Wars universe. The puppet version of Sy Snoodles was much more effective, as was the entire scene without that new fuzzy character. I can not stand the revised Star Wars films!!!


I'll update this page the rest of the Return of the Jedi series soon! 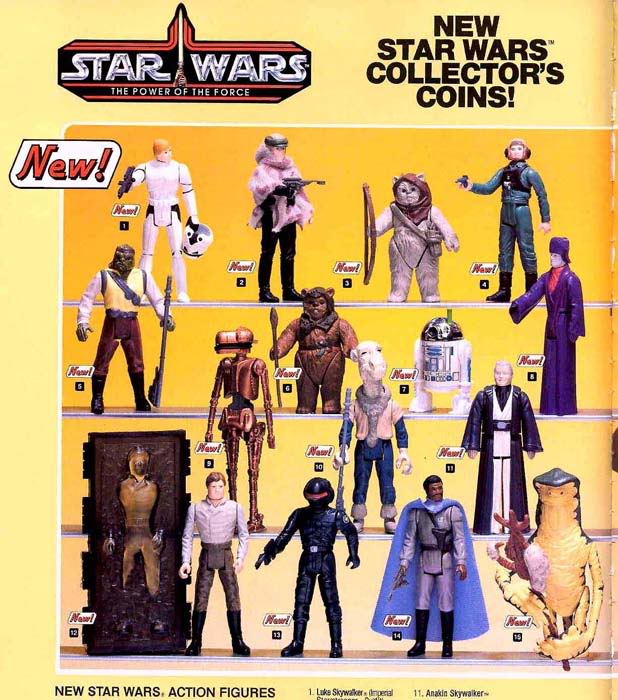 The image shown above is from Kenner's 1985 catalogue. It was found at this link:
http://gadgets.gunaxin.com/galaxy-cool-vintage-star-wars-ads/102477

After the Return of the Jedi series concluded, Kenner offered their last Star Wars movie figure collection in 1985. It was called Star Wars: Power of the Force and included 15 new figures based on characters from all three films. These figures all came with collector coins.

Three of the figures (#5, 9 and 15) were previously included with the Jabba the Hutt Dungeon Playset. A fourth figure, Anakin Skywalker (#11), was previously available as a mail away offer, and a fifth figure, the A-Wing Pilot (#4), was later included in the Droids action figure series that was based on the animated TV show. Therefore ten of the 15 figures are exclusive to this series.

Here is the list of figures numbered to correspond with the catalogue image: